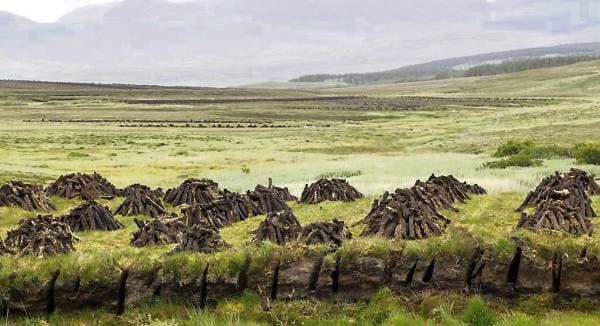 Turbary Rights Ireland, know your rights to cut and carry. Turbary rights are a common issue in the rural community, and one which can unfortunately cause some confusion.

The rights were formerly granted and administered by an estate landlord, who would allocate a specific bank of turf to each of his tenant farmers.

The management of the banks of turf was usually taken over by the Land Commission when it acquired the landlord’s estate.

A right of turbary in relation to bogland, in its simplest form, means the right to cut and carry away turf from a specific plot of bogland, and includes the right of preparing and storing on the bogland any turf that you cut from it.

When vesting the farms in tenant farmers, the Land Commission would often establish a trust to run the bog.

The Commission would then vest the farms in the various tenant farmers along with the right to take turf from a specified portion of bog.

The turbary right would be registered on their title in the Land Registry.

It is important to note that the extent of the right is limited to the fuel requirements of the dwelling house.

It is not a right to cut and sell turf.

The person with the right does not acquire any other right in the land from which the turf is being taken.

So how do you identify the plot from where you are entitled to take turf?

It is not uncommon that a right of turbary is generally in common with others, so you will not be the only person to cut turf from the plot.

Any person with a right of turbary only does not actually own the bog, they only have a right to cut turf from that plot

The person who owns the bog is the person who has such title to the bog that entitles him or her to grant rights of turbary over it.

It must be a greater interest than simply a turbary right.

In order to ascertain who actually owns the bog, your solicitor can carry out a search on the Land Registry website.

Rights of turbary can prove to be a contentious issue.

It is always wise to firstly clarify your own position before doing anything further.